In most Malaysian movies, if there is an evil character, there are expected outcomes for them – either they repent, kena tahan polis, or they die a horrible death if they don’t go into the right path.

Speaking of heterogeneity, this time we will look at the on-screen fate of characters on the margins of society, homosexual and transgender characters. Previously, LGBTQ characters weren’t even allowed to be shown on screen, but a rule change allows them, but with certain requirements: As long as there is a safe outcome for their lifestyle where bad things happen to them or they repent, then it’s fine.

For this article, we will focus on mainstream movies and tv shows – the ones you probably would have seen or at least heard of, so apologies to the little indie shows that didn’t make the cut. SPOILER ALERT: We’ll talk about the endings of these shows, so keep that in mind in case you plan to watch them.

So, first, we’re going to choose the first outcome they’re allowed to get screen time, which is:

1. Taubat – they prayed for the gays to go away It’s okay to be gay…if you repent and change your ways. This is the common moral lesson required in these types of films. This will usually involve the taboo character enjoying their immoral and hedonistic life; something bad happens to them related to their lifestyle; then either they find the light of god, a loved one helps them, or an ustaz monologue is enough for them to reflector a mixture of all of the above.

That’s what happened in the 2022 TV3 drama Suamiku Lelaki Pendosa, adapted from the best-selling Malaysian novel Imamku Lelaki Pendosa. In this story, main character Dean Ilyas, who seems perfect in every way, is actually *gasp* gay and is in a secret relationship with his ‘best friend’ Izfairin. He ends up marrying Cahaya, partly forced by his family to cover up the fact that he is gay, and after revealing his dirty secret to her tries to change his ways with the help of his wife.

Sure, they have to show that being gay is bad for you. After a video of him having sex with a man leaked online, Dean ended up losing his job and ostracized by everyone but his beloved wife Cahaya. At the end, Dean finally leaves behind his sinful past and commits to his wife, and dumps his distraught “best friend” – because if you decide to remain gay, you will be unhappy. Dean even has a baby at the end with Cahaya to show that he now has bertaubat and is now “straight”. Also point out an interior monologue scene where he recalls the traditional male lead before the credits roll to reinforce the show’s message. 2. Regret – they end up being really unhappy

Not everyone who is sesat will end up on the right track, so if you can’t, well, a life of emotional pain is for you my friend – at least, that’s what is allowed in our films.

This is the fate of the characters in the film Botol Dalam (originally titled Anu Dalam Botol) released in 2011 and is Malaysia’s first gay film. Rubidin and Ghaus are a gay couple in love with each other. While playing at the beach topless and sandboxing on Rubidin during an overnight beach campsite, Ghaus said: “Kalau tu perempuan, better lah”and said he calls her Ruby now. Because Rubidin thinks being a woman will make Ghaus happy, he is undergoing a sex change operation. Surprise, surprise – turns out that’s not what Ghaus wanted (because men, they never know what they want 🙄) and couldn’t accept Ruby as a wife now and breaks up with her . After that, Ruby’s testosterone started to rise somehow and he decided to return to Rubidin. He then marries a nice girl in his kampung, but is filled with regret because his anu is now in a bottle, so no panky fun.

There is a scene where Ghaus goes to the kampung on Rubidin’s wedding day and shows something in a basket to Rubidin’s mother. They didn’t show the contents, but we’re going to assume that it was Rubidin’s dismembered limb that caused Rubidin’s mother to fall. According to the director, this film is based on a true story, and at the end there is a quote from the real person about his regret. So there’s a mixture of taubat in this ending, but basically the message is once you have sex reassignment surgery you will regret it.

3. UNO reverse – they could have been the opposite sex in the first place This one is less of their fate for choosing to be one of LGBTQ. Rather, it is to be meant to be that way, which makes it somewhat acceptable to our censorship board.

In Waris Jari Hantu, a 2007 mystical horror film, Tok Wan Rimau, a bomoh lady wants to convey her saka tiger which is controlled by a ring on her jari hantu (middle finger). In case you don’t know, a saka is a spirit that is related to the owner as a kind of supernatural all-in-one butler/jaga/bodyguard who can do magical thingsand is usually passed on to the next of kin.

Enter his two grandchildren Ari, who is an effeminate man, and his cousin Tina, who is in love with him and wants to marry him. Cousins ​​in love are sort of a taboo, but the movie seems okay with the fact, probably because straight cousins ​​in love > man turn into a woman.

Ari offered to be the heir instead of Tina, the next one but was refused because Tok Wan only wants to pass it on to heiresses because to paraphrase his dialogue, “the women stay at home while the men seek their fortune”. Ari now introduces herself as a woman. Screenshot by Waris Jari Hantu.

Both Ari and Tina move to town, where Ari begins to embrace her identity and begins to introduce herself as a woman.. When she returns to the kampung, she has been ridiculed but finds that she was born intersex (born with a penis and a vagina) so she could to be a woman from birth. Wanting to be legally recognized as a woman, she goes to Jabatan Pendaftaran Negara but they refused her request for sex change on her IC so she gives up and reluctantly agrees to be a man.

It might sound simple, but the rest of the movie is actually pretty weird, so skip the next paragraph unless you’re a masochist.

Towards the end, Ari was attacked and seriously injured by gangster loan sharks because his transgender friend had borrowed money from them. To heal it, Tok Wan goes through a ritual where she becomes one with the saka tiger and licks its wounds. Somehow it saps Tok Wan’s powers, so now she’s an invalid. In the end, it wasn’t made clear who ended up inheriting the saka, but the cousins ​​decided to go their separate ways, with Tina getting the ring but Ari’s eyes may go rawrrr like a tiger. 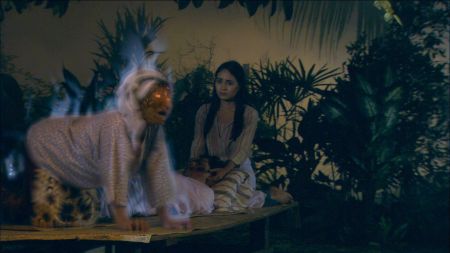 We don’t know if the movie involves bad things happening to him because he was trying to be a woman, but he ends up deciding to be a man due to bureaucratic hurdles. There’s also this extra caveat where his journey is actually okay because he could have been either gender anyway.

We know the synopsis is confusing BUT THE MOVIE IS EVEN MORE CONFUSING WHAT WE JUST WATCHED.

We’ve seen some of the fates of those in the LGBTQ community on screen, and how certain moralistic outcomes have to befall them for them to be approved for screen. Interestingly, this might be the only time nothing bad happens to them.

That’s what happened in the movie Spilled Sauce / Ke Mana Tumpahnya Kuahwhich recently debuted on June 9, 2022 and was adapted from the late playwright Jit Murad’s play Spilled Gravy on Rice.

We’re not going to give away too many spoilers as it’s a new movie – but a simple summary is: A father wants to have one last supper with his five children after the Angels of Death appear and inform him that his time is up. close. Not all of his children made it in time, and two of his sons – one gay, the other a good-for-nothing drug dealer – went on a drug-fueled party in the city, where they watched an extremely fabulous drag show with drag queens doing their thing. Nothing bad actually happened to the movie’s gay and transgender characters – unless you consider the gay son missing one last meal with his father a curse. After the drag show, the performers weren’t shown to suffer from their acts either, which is probably the first of many movies we’ve been through.

But there’s a reason it passed censorship. If you stay beyond the post-credits scene, you will see a scene implying that MAYBE none of this was real. So the drag show never happened and his son probably wasn’t gay – it was all just the father’s imagination or maybe some hidden fears. This movie actually went through censorship hell – where it was rejected several times since its first realization in 2012and only received approval in 2020. And then the pandemic happened, delaying the release, so after 10 years, this movie will finally debut in our cinemas.

We managed to catch the media preview of Spilled Gravy, and despite being 10 years old, the film is pretty darn bold in what they do, especially in terms of its on-screen characterizations.

Reality – it’s different from the movies Image by AFP/Getty Images via PinkNews.

Situations where people in the LGBTQ community regret their choices – such as participating in their lifestyle or undergoing gender reassignment surgery – are not always the case in real life. According to activist Pang Khee Theik in reference to the film Dalam Botol, “Many of us…have absolutely no regrets about who we are.”

So while there isn’t an entirely fair mainstream representation of them on Malaysian screens, there is at least some their inclusion in our stories. There is still a taboo in our society depicting them as it is feared it will encourage the LGBTQ lifestyle, so we’ll have to see if the LPF is willing to bend more to tell a different story about this community at the moment. coming.