The Apache web server is one of the most popular open source HTTP servers out there.

And Docker is the most popular container runtime among DevOps teams.

Given the pair’s popularity, it’s no wonder the need to dock Apache web servers is a common requirement for many cloud-native deployments.

There are several ways to accomplish these seven steps, although using a Dockerfile is the most common.

To do this, simply create an extensionless file named Dockerfile on your hard drive. Next, place all the files you want to deploy to the dockerized Apache httpd server in a folder named website.

Here is an example httpd Dockerfile which will copy files from a folder named /website/ on your local computer and place these files in the Apache Docker image website hosting directory.

The first line of this Apache Dockerfile instructs Docker to pull version 2.4 of the official DockerHub httpd image.

The second line asks Docker to copy all files from a subfolder named /website/ and move them into the htdocs Docker image folder httpd.

In this Apache Dockerfile example, the /website The folder listed in the COPY command is relative to the folder where the docker build command that uses the Dockerfile will be run. A full path to the folder containing all your website files can be provided instead.

Note that this command will not create a subfolder named /website in the dockerized httpd image. All copied files will be served from the root folder when running the custom Apache Docker image. 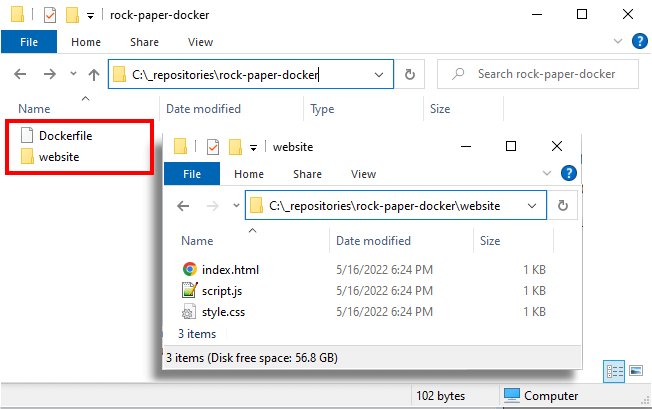 In this example, Apache Dockerfile resides in the parent directory of the website folder.

With the Dockerfile placed in the parent directory of the websites folder, run the following command from the folder where the Dockerfile resides. This command will dockerize Apache with your website packaged in the custom image.

Note the period at the end of the command. This endpoint tells the docker command to look for the Apache Dockerfile in the current directory. If the command is not run in the same folder as the Dockerfile, a full path must be provided.

To verify that the docked Apache image was created, run the docker images command. You should see an image named apache-docker-example listed.

Once the image is created, the last step is to run the dockerized Apache http server in a container. Run the following command to start a container that runs your custom httpd image on port 80.

The dockerized Apache website, which in this case is a friendly little guessing game, will now be accessible on port 80 of your browser.

This dockerized Apache website runs on port 80 of localhost address.

How to avoid conflicts with port 80

If port 80 is busy, or if you want to create a second container based on your custom httpd Docker image, run the following command which exposes the container’s internally used port 80 to the externally accessible port 88 of your local computer.

The docker run command creates a container based on a Docker image and then runs that container.

The docker run command -D The switch allows the container to run as a background daemon process. If this was not added to the command, the container would not release control of the terminal window or command prompt that issued the run command until the anchored Apache website container end.

Docker containers are assigned long hexadecimal codes that identify them. the -Name The option allows you to assign a friendly name to the container so that it can be easily referenced in future commands.

The httpd Docker image internally runs the Apache web server on port 80. However, docker does not expose the ports of internally running processes by default. the -p The command exposes port 80 used internally by Docker to an open port on the local machine.

In Docker, you build images while you run containers. From a Docker image, many container instances can be generated.

Where is htdocs in Docker httpd images?

This folder can be updated on the fly by adding files with the docker-cp ordered. The following command would add a file named rps.html in the root folder from which Apache serves the files:

Whenever a running dockerized Apache httpd container is updated, a new image must be created to persist the changes. To create a new image based on a Docker container running the Apache httpd Docker image, simply issue a commit docker ordered:

Docker and Kubernetes are the standard for deploying cloud-native applications. If your deployment architecture includes a static website that runs on an open source file server, you can rest assured that the process you need to follow to create a Dockerfile, dockerize Apache, and host your deployed website in a container is a relatively simple undertaking.